It's The Great Pumpkin Charlie Brown 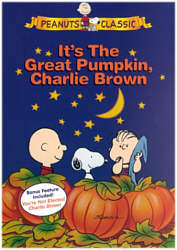 One of the things that makes The Great Pumpkin so special
was the fact that it was adapted from an actual series of
Schulz’s comic strips that comprised the show’s main story.

Linus believes in a strange hybrid of a jack-o-lantern,
scarecrow, and Santa Claus character named: The Great Pumpkin.

Linus thinks that the Great Pumpkin will arise out of
the most sincere Pumpkin Patch on Halloween night,
and deliver toys to all the true believing children. Of course,
Linus becomes somewhat obsessed with his self-appointed
mission to not only receive toys from The Great Pumpkin
for his undying belief, but he actually wants to be
in the garden when the benevolent giver of Halloween toys
rises from among the pumpkins.


October 31st has arrived again, and the night of Halloween
is upon the Peanuts gang. Lucy gets brother Linus to carry
home her carving pumpkin, and decides he doesn't really
like what's inside the pumpkin.

While the kids are busy readying their costumes for an
evening of trick or treating, Linus is penning his annual
letter to the Great Pumpkin. 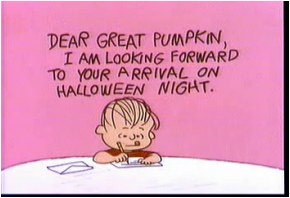 Lucy is obviously embarrassed by her brother who
is ridiculed by the other kids. Linus patiently explains
the merits of the Great Pumpkin to Charlie Brown, but
dismisses Charlie's non-belief as a matter of religious differences.


Every year Linus returns to the most sincere pumpkin patch he can find......


Linus: "Here we are, Snoopy, sitting in a pumpkin patch waiting
for the Great Pumpkin. Every Halloween the Great Pumpkin flies
throughthe air with his bag of toys, and just think.....if you
and I sit here all night, we may get to see him!"

"I really appreciate your sitting out here with me, Snoopy.....
I must admit, however, that I've been wondering why you're wearing
those dark glasses?"


Snoopy:
"There are certain times when you prefer Not to be recognized!"


One year, Linus persuades Sally Brown to keep his waiting.....
Sally must decide whether to participate in her first
trick-or-treating, or keep vigil in the pumpkin patch with the
love of her life, Linus. 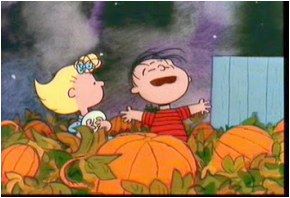 As the kids go trick or treating, Charlie Brown's is
found wearing his famous ghost costume, which has 18
holes instead of the traditional two.

Charlie Brown says: "I got a rock." 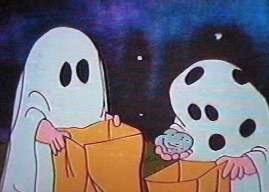 After trick or treating is over, the Peanuts gang,
minus Linus and Sally, gather for the rest of the evening
for a Halloween party. The highlight of the party is
when Lucy goes bobbing for apples and brings up an
apple with Snoopy on the other end of it. 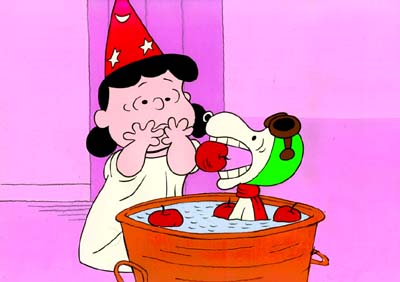 After being lambasted by Lucy about "dog germs",
Snoopy decides to go out on patrol searching for the
Red Baron. As our heroic fighter pilot lurks through
the underbrush of France (actually the neighborhood's backyards),
struggling to find his way behind enemy lines....he ends
up in the pumpkin patch.

Snoopy rises up in the moonlight of the pumpkin patch....
Linus, thinking The Great Pumpkin has finally arrived, faints. 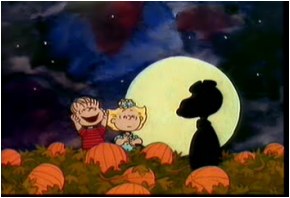 Sally is pretty upset when she realizes she spent the
whole night in a pumpkin patch, missing out on all the
treats and the party, only to witness her dog Snoopy.

Sally: "I was robbed! I spent the whole night waiting
for the Great Pumpkin when I could have been out for
tricks or treats! Halloween is over and I missed it!
You blockhead! You kept me up all night waiting for the
Great Pumpkin and all that came was a beagle!"

"I didn't get a chance to go out for tricks or treats! And
it was all your fault! I'll sue! What a fool I was.
And could have had candy apples and gum! And cookies
and money and all sorts of things! But no, I had to
listen to you! You blockhead. What a fool I was. Trick
or treats come only once a year. And I miss it by
sitting in a pumpkin patch with a blockhead. You owe
me restitution!"

Linus: "You've heard about fury in a woman scorned, haven't you?"

Charlie Brown: "Yes, I guess I have."

Linus: "Well, that's nothing compared to the fury of a woman who
has been cheated out of tricks or treats."


Back To Charlie Brown, Snoopy, and Peanuts Index

For some Wonderful Pet Gift Items