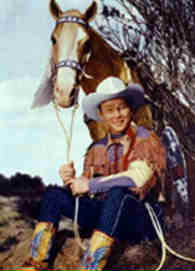 
Trigger, Roy Roger's beautiful Golden Palomino stallion,
and co-star with Roy in many of his movies and Roy's
TV show, was often billed as "the smartest horse
in the movies."

The two of them appeared in dozens of westerns in
the 1930's and 40's, always chasing and thwarting
the bad guys, and working to serve peace and justice.

Trigger started life out as Golden Cloud. (1932).
His sire was a thoroughbred horse that had raced at
Caliente Track, and his dam was a cold-blooded palomino.
Trigger was foaled on a small ranch in the San Diego area
which was partly owned by Bing Crosby. The manager of
that ranch was Roy Cloud, a breeder originally from
Noblesville, Indiana. At around 3 years of age,
Golden Cloud was sold to the Hudkins Stables, which
rented horses to the movie industry.

Golden Cloud's first major appearance was in the movie,
"The Adventures Of Robin Hood" where he was ridden by
Olivia de Havilland. (1938)

When Gene Autry failed to report for work at Columbia
Pictures, Roy Rogers found himself cast in the lead
role for "Under Western Stars".


Before filming began on "Under Western Stars",
Hudkins Stables brought their best lead horses to
the studio so Roy could select a mount. As Roy recalled
it, the third  horse he got on was a beautiful golden
palomino who handled smoothly and reacted quickly
to whatever he asked it to do.

Roy said of Golden Cloud "He could turn on a dime and
give you some change."

Smiley Burnette, who played Roy's sidekick in his first
two films, was watching and mentioned how quick on the
trigger this horse was. Roy agreed and decided that
Trigger was the perfect name for the horse.

Roy purchased the horse for $2,500 and eventually
outfitted it with a $5,000 gold/silver saddle.

Roy was proud of the fact that throughout his more
than 80 films, the 101 episodes of his television series,
and countless personal appearances, Trigger never fell.

Roy once said that "he felt that Trigger seemed to know
when people were watching him and that he recognized
applause and just ate it up like a ham!"


During a film and TV career that spanned about twenty
years, Roy Rogers had a variety of horses which were
billed as some variation of 'Trigger' --- there was the
original, and Trigger, Jr. and Little Trigger ... and
there were 'personal appearance Triggers' and 'Trigger
doubles'.

Trigger won a Patsy award for the role in "Son of
Paleface" & 1958 the Craven award winner. He was
so popular that at one time, he even had his own fan
club with members from all over the world.

On July 3, 1965, at the Rogers ranch in Hidden Valley,
California, Trigger, at age 33, passed away. Roy
was reluctant to "put him in the ground," so Rogers
had the horse mounted in a rearing position by Bishoff's
Taxidermy of California.

Also mounted and on display at the Roy Rogers Museum
are Trigger Jr. Buttermilk, and Bullet The Wonder Dog.


Trigger Jr. was registered as Allen's Gold Zephyr. and
foaled in 1941. His sire was Barker's Moonbeam and his
dam was Fisher's Gray Maud. He was bred by C. O. Barker,
of Readyville, Tennessee. Barker's Moonbeam was sired by
Golden Sunshine whose dam was Golden Lady. All were
palominos. 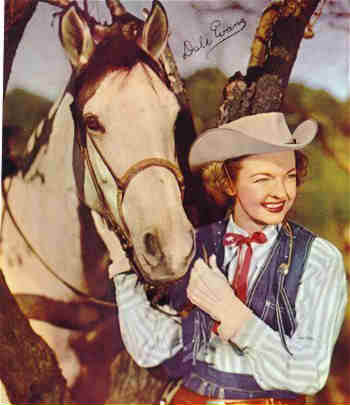 Originally owned and trained by Hollywood legend Glenn Randall,
Buttermilk was offered to Dale because her first movie horse
looked too much like Trigger. Dale fell in love with the gelding
and bought him. She rode Buttermilk in all but six of The Roy
Rogers Show television episodes that aired Sundays from 1951-57. 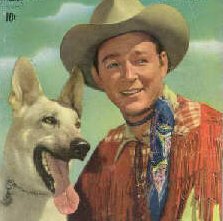 Roy and Dale's faithful German Shepherd dog, was a constant
companion and often hero as he helped the duo maintain
law and order in the western town of Mineral City. 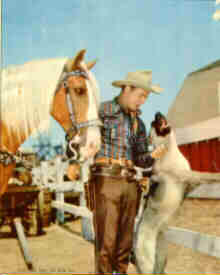 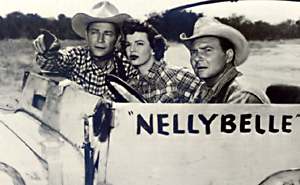 
Best known as cowboy Roy Rogers' comical sidekick, Pat Brady
was the son of traveling performers, and first set foot on-stage at
the age of four. From the moment he was featured in a road-show
production of Mrs. Wiggs of the Cabbage Patch, he was hooked on
showbiz for life.

While appearing as a bass guitarist in California in 1935,
Pat struck up a friendship with a country & western singer
named Leonard Slye, a member of the popular Sons of the Pioneers.
When Slye became star, Roy Rogers, he recommended Brady as
his replacement in the Sons band.


In 1937, Brady played comedy relief in several of the Charles
Starrett Westerns at Columbia. In the early '40s, he
moved to Republic Studios, where he played camp cook
Sparrow Biffle in the Roy Rogers vehicles. When Rogers
moved to television in 1951, he took Brady with him.

As himself on the show, he appeared in well over 100 episodes
of The Roy Rogers Show, tooling about the sagebrush at the wheel
of his faithful jeep "Nellie-Belle."

After the series was cancelled, Brady continued his association
with Rogers on TV and in personal appearances; he also rejoined
the Sons of the Pioneers in 1959.the mid-'60s. 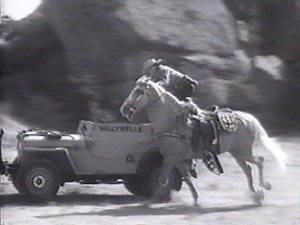 The Roy Rogers Show,  featured a 1946 Willys CJ-2A Jeep
named Nellybelle, which had some unusual bodywork. It was in fact
owned by Roy, but was driven in the show by his comic sidekick,
Pat Brady. The name apparently developed out of Pat riding an
ornery mule in the earlier movies, and addressing it with
phrases like "Whoa, Nelly!"

In most episodes of the show, Nellybelle's name is painted on her
doors.


In the picture above, the show begins with a wild stunt in
which Nellybelle starts rolling down a hill by herself, and
Roy chases her on Trigger and leaps from his saddle into the
Jeep to bring her to a safe stop.

Dale says, "Roy, you shouldn't have taken a chance like that for
Nellybelle!" But Roy replies "Well, she's part of the family,
Dale."


As Pat Brady drove around Mineral City, he had the habit of
talking sweetly to his Jeep as if his verbal compliments could
convince Nellybelle to get up and go.

Roy Rogers chose to include a Jeep into the program because
he noticed that after WWII, the Jeeps were real popular,
especially with children.


Back To Index of All About Roy Rogers


Back To Famous People & Pets

Gift Items for All Pet Lovers